Shading his eyes against the fiery glare below, captain Uhr-Maduknezhar stood astride up in the commanding archer tower of the slave galley Grasp of Lidunammu. The scarred and grizzled seaman observed the chaotic battle scene in the archipelago below while smoke columns obscured his view. He gripped one pointy merlon to counter the worst rockings of the crenellated tower as the frantic sea waves tossed the narrow ship about. The sounds of blackpowder blasts, creaking hulls and the galley drums were in the air. In the accursed salty wet, debris and bodies both alive and dead littered the surroundings, picked at by bloodthirsty sharks and yet worse behemoths of the depths, some of them a danger to the unharmed vessels. The situation was difficult to assess, for behind the smoke, the flimsy wooden masts and sails of the enemy fleet had become an indecipherable tangle.

"Our fire ships shouldn't ever have let loose at such an angle," groaned decksofficer Bel-Ninridu, gesticulating madly at the unquenchable flames dancing across waves and wrecks below. "Just look at it! It's a bloody mess of firewalls down there, smokescreens shielding their escape. Gallows!"

Without glancing at his subordinate, Uhr-Marduknezhar replied: "Our metal hulls have passed through seas of molten rock. Our rams have licked the waves of hell. What's a little flame to that?"

"With our ship unenchanted, without the preparatory rites, the rowers will perish at oars. We'll be stranded at great cost," said Bel-Ninridu.

"Then let the slaves broil and burn in their shackles if they wish to succumb to a little heat," said Uhr-Marduknezhar. "The roasted thralls will make for fine steaks. The omens are right, I am sure of it. Signal the helmsman, bring the Grasp of Lidunammu about and aim her at the largest pillar of smoke, right there. Then signal the taskmaster: Breakneck speed, full ahead. The gods will it! And brace for impact."

Here's a scale shot of the sculpts, the sizes of which are also true for the resin casts. These models have been designed to fit with Games Workshops OOP Man-o-War: 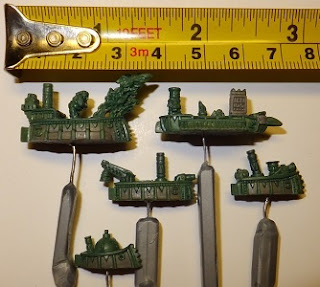 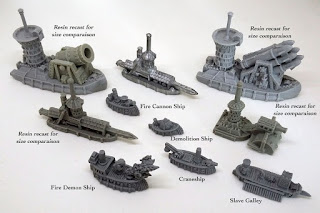 The resin casting by Zealot Miniatures is, as far as I am able to discern, flawless of a kind not often seen among resin miniatures. Nevertheless, should a miniature be damaged by air bubbles or other defects, just contact me with pictures of the damage, and the model will get replaced.

Here's an example of the ships all painted up. Painting done by Harry. 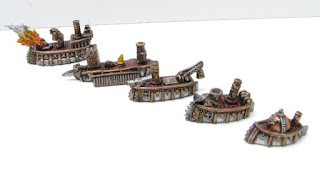