In ancient times, the Elven composite bow held sway over vast tracts of land and struck fear and silvern steel into the heart of Orcs and Menfolk. Its reach was long and strong, and the shafts of its arrows marked the end of warbands, armies, cities and tribes alike. It was likened unto lightning, for it was death upon steppe and highlands; plains and mountains; swamps and deserts; forests and seas alike. This ranged weapon was the favourite tool of death for the multitude of Elven tribes, realms and city-states which dominated such vast regions. By composite bow and spear and blade did the dreaded Elves crush any resistance from lesser races underheel within their bloodied spheres of influence, and wherever their cohorts and legions marched, mortals trembled and turned to their gods in fear.

In ancient times, death came all too often at the sharp steel end of an Elven arrow, and often the victims had little clue as to why they must die, for the needs and wants, desires and reasons for action of the haughty elder tribes remained locked behind arrogance and veils of mystery. The true secrets of the Elven composite bows' manufacture remained likewise ever locked within Elven minds and appears to have never truly spread unto other races except for in heroic legends. The composite bows of the Elves were fabled not only for their sheer power and rumoured enchantments, for they were known far and wide for their intricate and demanding making, which went to excesses that corresponding Human bowyers would never dare imagine. Whatever magic and mundane craftskills went into the creation of these deadly weapons, the results were composite bows and strings able to withstand wet and cold and salt without slacking, which enabled Elven archers to roam in any clime, at any altitude, without their shots weakening. Thus were laid the foundations of carnage without end nor limit.

In ancient times, mortals lived violent lives filled with hardships and trials, and the landscapes of the world were awash in blood and feuding. Yet for all the savagery of the nomadic hordes and barbaric settled peoples, few calamities were as feared as the wars of Elven tribes, whether against each other or against lesser races. Raids and invasions alike saw the deaths of Men, Orcs, Goblins and many more races. None were spared this terror. In great numbers did nomads and savages drop dead under the hail of Elven arrows. Great and terrible wars were fought between Elves and Dwarfs, as the strongest civilizations beneath the skies grasped for vengeance, power and territory. Uncounted masses of younger mortals, enslaved or free, were constantly caught up in the maelstrom of conflict, and the bones of the perished ones littered the ground from sea to sea, arrows protruding from skulls and ribcages. For this was an age of empires, and their wars ravaged the world as greatly as their monuments and achievements soared.

And in the midst of this swirling chaos, the power of the bow endured for millennia.

Elven archery came in many forms whether with worldly or otherworldly arrows, whether magically touched or poisoned or flaming, or merely a rain of silvern arrowheads glinting deadly in the light cast by sun, moon or torches as it fell upon the foe. Elven archery came in the form of ambushes, and it came in the form of assassinations. Likewise Elven archery came in the form of sharpshooters clearing the skies or battlements of besieged walls, and it came in the form of mounted bowmen terrorizing the steppe lands and beyond. Yet most iconic of all the shapes it took in ancient times were the disciplined bowline, with ranks upon ranks of heavily armoured Elven composite archers standing tall in rigid lines born out of endless drills, drawing, nocking and loosing their arrows as if all the hundreds of bowmen were one and the same being. Along with the lockstep advance of Elven phalanxes, they were the very image of order on the battlefield, and their regimented display alone awed foes and unnerved lesser mortals to whom such firmness and exactitude were otherworldly in the midst of carnage. The bewildering manoeuvers and feats of shooting pulled off by such line companies of Elven archers were the stuff of sagas and fear among the feral tribes of many races, and even the tough Dwarfs acknowledged their value as warriors, however grudgingly.

These were ages of fire and bloodshed, of primal fear, ruthless greed and titanic ambitions. The hunger for power was fed at the point of blades and arrows, and great deeds of glory and infamy alike lived on in legend long after all characters involved had turned to ash and dust. One of the Elf archer companies which won eternal fame were prince Draecarion's Longbows, who pioneered the next level ranged weapon of Elven armies and reaped bloody and fantastic achievements upon the battlefield, including shooting the black dragon Maeranichas clear from the sky at Ivory Rock; out-shooting the malignant Dwarf handgunners at Hierlan Ford; and massacring the elite human foot soldiers of emperor Mignusian III's Jackal Guard despite their closed ranks of tower shields and fine heavy armour. Some heavy Elven archers who knew renown were mercenaries, like the Teal Cloaks of Jaendrath Bloodeye, the Swan Feathers or the Hundred For Hire of disinherited prince Maelgor, famous for singlehandedly suppressing the legions of defenders upon the great city walls of Toraxaslan with a withering shower of arrows, which allowed swordsmen to climb the walls by ladder, virtually unchallenged during their long and perilous ascent. Other Elven heavy archers of note were uncannily accurate and could shoot into the eyes of quick and nimble small birds in the sky, such as the Goldbow company were known to do, or hunting schools of flying fish across the wavy sea's surface in the manner of the Kraken Patrol of the island city-state of Finalgon.

Whatever their feats and glory in war, Elven archery skills by far surpassed those of Dwarfs and Men and Goblins, and the ease with which the Elves handled their silvern bows seemed to deny the inacurracy inherent in such weapons. Massed Elven archery backed by ballistae, sorcery, hunting eagles and javelins were likened unto a symphony of death from afar, yet one need not look to such sophisticated musical pieces to glimpse the capabilities of Elf archers, nor to face the scorn with which they viewed the prey of their arrows:

"Out on field of fair Roenalloth,
a foul horde roamed in stink and sloth,
fed old on bark and young on broth,
red lice in hair, kilts torn by moth,
out-hollowed cheeks and rabid froth,
black pelts of rats sewn into cloth,
these filthy Men met Elves in wroth.

A princeling son of Mannish chief,
came forth an' 'splayed muscles like beef,
in gurgled tongue he blamed Elves thief,
for stealing his kin's coast and reef,
wishing back his tribe's lost fief,
and kept with body his speech brief,
showed his arse, not worn a leaf,
so we shot him there to father's grief.

Then Elven bows turned upward still,
and voice of Men fell mute, lack-will,
the Elves drew strings as one by drill,
the hearts of Menfolk gripped by chill,
thoughts all turned from ale and swill,
our arrow's feathers not for quill,
their silvern points now blood to spill,
archers sensing huntsman's thrill,
red banelust thirsting for its fill,
as Seaking's greyhawk yelled out shrill,
we loosed the arrows for the kill.

The mortal Men their death did sign,
when arrowproof they thought 'selves fine,
for each Elf on field the Men were nine,
wished to in tent of Seaking dine,
a plan to hang Elf-heads in pine,
yet arrows fell, Man-whelps did whine,
bravehearts fleeing, losing spine,
us Elves stood fast in firing line,
slaughtered Menfolk raw like swine,
and Mannish blood ran red like wine. 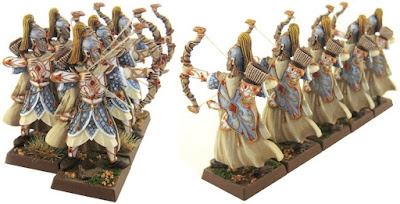 Note that if you find their size too large for living Elves, then statue duty always exist in terrain and unit fillers. Fancy a marble painting challenge?

Possible flaws: Apart from scale, a few scattered air bubbles exist on the lower cloaks of some of the cast miniatures, as do an odd miscast on the inside of the cloak below the tunic, once again on some (not all) of the Elf archers. The air bubbles are simple to fill out or turn into cloak wear and tear, while the cloak miscast is hardly visible due to its hidden location, particularly in a ranked unit, and is possible to carve away or fill out with sculpting putty. These mentioned mouldmaking flaws must be expected to show up on some Elf archers in every order, and will not be treated as product faults requiring replacement or recompensation. Likewise, please do not ask me to pick out flawless miniatures only for your particular order:

Also, some few bows might come out a tad bent, down by the hand after casting, storage and/or shipment. This is easily fixed by bending them back in position, and in case of rare cracks or even broken-off bows, the bows were sculpted thick enough to drill into and pin back into place on the hand. There are, in some places, double mould lines resulting from various master moulds and production mould on a few of the Elf archers; this is easily cleaned off with a modelling file or hobby knife.

Ranking-up: These cloaked Elves would be difficult to rank up on ordinary slottabases with flat tabs under their feet. Therefore, these miniatures are instead made with a simple tap under their right foot. Simply drill a hole through the base, enlargen with a hobby knife and glue the tap into the hole and the feet onto the base. Note that smooth ranking-up is something of a challenge, which is however easily overcome by some careful testing and planning, as in the picture below: 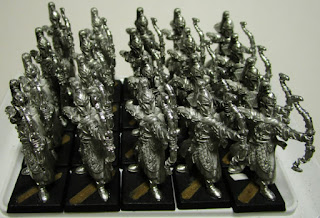 Stringing: The blog Massive Voodoo have a fine tutorial on hand if you wish to string the bows, although thread or fishing line could be used instead of human hair. I always apply super glue to the bowstring and arrows, to keep the string's drawn rigidity and make sculpting details and painting simpler on the arrow. This does thicken the string, however. Arrows are easily made from thin needles, positively given a slim arrow head and steering feathers with green stuff. Tip: Make sure the arrow's length matches that of the quiver's. Note that the Elf heavy archers' bows were sculpted with a detail ring at both ends to aid any bowstrings glued around the bows. 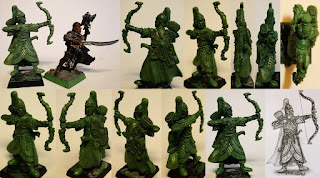