Taming of the Wildman

Among the tribal Dwarfs, black of heart, was told in ancient times the myth of the taming of the Wildman. It is a tale without heroes, and a saga bereft of soothing power, for it is a story of fell deeds and dark fate, a legend all too familiar from real life experience for the numberless hordes of slaves toiling beneath the whips of these malignant Dwarfs.

Once upon a time, the city of Zhurninnuk prospered and grew, and its wealth was increased every year by its artisans and traders, and the offerings of its priests grew ever more rich. Its scribes were many, its slaves legions, its farmers and herdsmen almost beyond counting. It was a mighty city, a place of power, where high lorded it over low, and order lorded it over chaos. And thus it was that Zhurninnuk ever grasped for more and more land, more and more water, of everything more and more. Its woodsmen hewed down strong oaks and cedars with axes of bronze. Its peasants dredged marches, built thick banks around the river Harrnuk and tamed the floods for their fields in their irrigation canals. Its hunters felled lion, gazelle and ibis alike, its gatherers plundered the nests of birds, and its fishers caught the life of the waters.

Long and strong was the reach of great Zhurninnuk of the three walls and twelve ziggurats, and in strength the city-state conquered the wild and sought to extinguish its flame, just as it waged war against enemy cities and tribes. Yet the wild responded in violence, and caused the mighty Wildman to come forth, and forth he came, naked and horned, strong of limb and covered in fur, walking on two cloven hooves yet possessing hands with which to strangle, tear and destroy. And destroy he did. The Wildman ravaged the livestock and bred bastard races of Satyrs and Minotaurs upon the flocks of the cowherds and goatherds. Soon his offspring roamed the wilds, and they laid waste to many a village, yet none of his children surpassed their raw father in might and deeds.

The harrowed shepherds brought complaints to the city of Zhurninnuk, bringing word of a Wildman who deprived them food and slept under the sky, knowing neither father nor gods and breeding in full sight of sun and stars like a lowly beast. In response, the city elders drew from their wisdom a cunning plan, and sent out the Temple Harlot Zhamshet to lure the Wildman into the tamed lands. Lust overtook the rage in the heart of the Wildman upon sighting Zhamshet, for she seduced him and was mounted by him for twelve days and twelve nights, thereby teaching him the ways of men and women. After this, Zhamshet weakened the Wildman with food and drink, and taught him to eat bread and drink beer in the manner of men and women. Exhausted after all his labours, Zhamshet then taught the Wildman to sleep under covered roof and blanket in the manner of men and women.

Thus drained of primal strength, the once-ferocious Wildman was taken to the city, where the Temple Harlot promised to marry him in sight of the divine idols, yet the Wildman was met by blades not incense at the temple, his trust in her promises repaid by treachery not truth, by lies not love. At the foot of the ziggurat stairs, the High Priestess and the Stricken Dwarf stood awaiting, the latter struck by the lightning and thunder of the gods for his sins, now serving the temple alone and heeding no other mistress. The High Priestess uttered but one command, and the strong warrior fell upon the Wildman in full armour. Long did they battle, yet in the end hoof and fist and fang and horn proved no match for axe and shield and ironshod boot, and the Wildman was kicked to the ground, bearing scars from his combat. On his knees, the ferocious half-beast was subdued by the Stricken Dwarf, who shackled him and left the Wildman kneeling before the altar, exposed and helpless, with neither friends nor kin to save him.

At the sight of her lover's defeat, the Temple Harlot sipped beer through a straw after her exhaustive work, while the Stricken Dwarf taunted the Wildman. Then, the High Priestess drew her sharp knife, numbering the various offenses of the Wildman and recalling his forbidden breeding with the livestock of men and women, and she raised the blade high, about to sacrifice the offending member of the Wildman to the gods...

Taming of the Wildman

This 32mm scale kit contains 4 miniatures and 4 extras.
Bases are NOT included. Picture of miniatures painted by Enjoysrandom is for display purposes only.

The resin casting, by Zealot Miniatures, carries detail well, but is afflicted by the usual mould lines and stray air bubbles found on many resin miniatures. 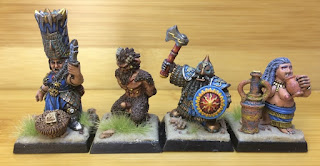 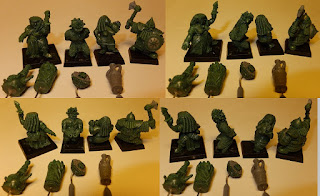