Hunger gnawed in his gut, and his eyes were dry like desert sand, yet still Hamukk bore a smile on his hollow-cheeked face. He had done it! He had outsmarted the stunted masters with their log-thick arms and coiled beards. He had outran their stumped feet and cruel hands. He had hid, and he had sneaked. He had covered his tracks and kept one step ahead of their vicious lackeys all of the time. The jackals! The dogs! All outwitted. His long plight of labour and hardship was at long last over. Freedom would be his, and slavery but a rotten memory with which to scare his future grandchildren. Praise the gods!

Hamukk, son of Bernu and Ishya, of the Human tribe Lakash, ran a calloused hand through his dirty, straight black hair. That hand had only three and a half fingers left. He shivered at the thought, yet smirked triumphantly at the certain knowledge that his captors would never set their brands and blades and tongs to him again. The thrill ran through him, blood rushing in his veins and feeding his hopes. And all thanks to a chance overhearing!

That sun-scorched day would stay with him forever. That moment, when he stood chest-deep in the muddy river waters and harvested reeds with a burnt clay sickle, and the priestly acolytes walked past slothfully. Their conversation had for some reason raised his interest from the very start, and he had memorized every word of theirs. They had talked of a labyrinth, a place of darkness through which no man not chosen by the gods or anointed in blood by demons could pass. They had named the location, and it was not far off. Most importantly, they discussed rumours of long maze tunnels leading out to hostile tribal grounds with gates wide open and undefended. Thereupon the short, bulky acolytes had reaffirmed their faith in their foul gods by praising the deities for watching over the labyrinth.

A labyrinth! He had trekked through mountain ravines all his life before being caught by the devious blockbeards from the lowlands, and he would take his chances with a mere handmade maze any day. The trick was to not walk in circles, he had decided. Hamukk had then and there determined that this was a sign from his people's gods, and had acted quickly, stealing provisions and torches in the night, running off into the windy wastelands, zigzagging through nigh-on lifeless terrain and walking in a long crescent toward the spot mentioned by the acolytes.

It was indeed undefended, except for by some scorpions just inside the entrance. They had nearly been the end of him, but he had glimpsed them in the ruddy light and brought his flaming torch down upon the venomous critters, scaring off the scorpions and clearing the way. Fire truly was a stolen gift from the gods. It gave man power over beast, and man power over darkness. With his torches he had already made it through most of the maze, he was sure.

There were costly relief carvings everywhere on the walls, painted in gaudy colours and covered with figures. The relief carvings seldom repeated and thus he had good reason to think that he had not gone in small circles more than thrice. In the light of his flame he could spot the accursed Dwarfs' conception of gods, goddesses, demons and myths. He spotted historical scenes of slavery, warfare and hardship, as well as great works undertaken, sorcery and above all atrocities. There was flaying and maiming and crushing, done by malevolent Dwarfs, usually against Humans and Goblins. They did indeed like to brag about their cruelties, didn't they? But those scenes no longer concerned him. He was no longer part of their malice and torture. His trusty torches would carry him through, like a beacon of the gods. Yet there was only one torch left now, and still there was no end in sight of the maze...

The cocky smile vanished. Hamukk swallowed, and moved faster, more rashly than before. He stopped memorizing relief scenes for the sake of speed. The exit must be here somewhere! As the flames burned out their oily fuel, he ripped off his bandages, his headband, his loincloth and even loose hair to feed the fire. He could get other clothes later, but not another life. Steps clattered and echoed through the cool labyrinth, faster and faster. He blowed as much air as he dared into the dying embers, blowing up small flame tongues anew. Hamukk saw less and less of the richly carved stone walls around him, and relied ever more on his hands to guide him along the walls. The darkness was closing in. Damn...!

The torch went out with a sputter and sizzle. Hamukk blinked at the coloured lights dancing across his retina. When they were gone, nothing remained. There was not even moonlight reflected in the corridor. Everything went solid black.

Teeth clattered as the escaped slave fought a wild panic welling up from within. He began scrambling down corridors, hands shaking on walls to his left and right as he sought guidance. He slid past corners in a stumbling jog, panting and whining. He fell and rose, unseen bruises already aching on all limbs. He had to get out! He ran for it, ran hard, and crashed into a stone wall. The violent impact stole away his breath and senses, for how long he did not know.

Hamukk eventually woke up on the smooth floor, or was he perhaps still asleep? It was impossible to tell the difference. His eyes gave the same report whether they were shut or open. Blackness, and nothing more.

The man's head was strangely numb yet at the same time beset with sharp pangs of pain. Hamukk suspected that his headlong collision with the wall had damaged his mind. His nose was broken, and he had lost two of his teeth, worn by millstone flakes as they were. He prayed to three gods and seven goddesses, yet heard no response. Was he already in the netherworld? Was this the place of dust and darkness that all men feared to enter? How would the other spirits react to a living man among themselves? Or was he even still alive?

Hamukk had no way to tell. For untold hours he sat on his haunches while his head spinned worse and worse. His thoughts turned into a maelstrom of confusion. At last, he reached the bewildered conclusion that demons were stealing away his mind. He rose up and swore heinously at them, uttering such foul words that men would have killed him for the insult. Yes. Demons! It was the demons! The former slave fell silent for a while. Then he whispered: "Reveal yourselves."

And in the darkness, the eyes of all the relief figures on the walls lit up, like a nightsky of red embers. Watching him, uncaring. It was as if all the gods had convened to judge his soul, and found him a subject unworthy to even assemble court for. They stared at him. Forever.

It was the final straw. Hamukk fell hard to his knees, warm blood trickling across the cold obsidian floor. He clawed at his eyes in madness. And screamed until his lungs burst.

Originally planned to be cast as rolling pins, for making textured details in hobby putties. See the original blogpost here.

The fine resin casting, by Zealot Miniatures, carries detail well, but the thinness of the plates made it necessary to drill holes through undetailed areas for mould support. These holes are easily filled in with modelling putty.

Once cleaned, just glue these wall plates on to some block and adorn your terrain pieces! The pieces have been designed to fit next to each other, with the top and buttom details being the same. 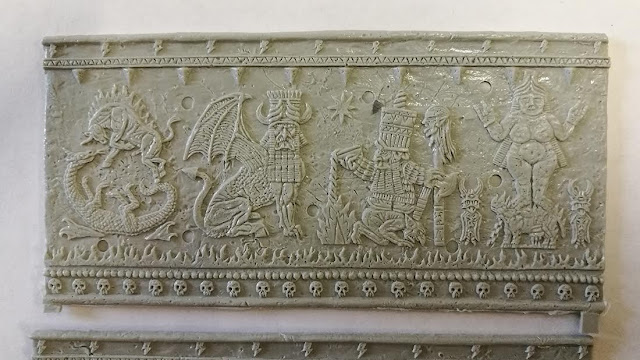 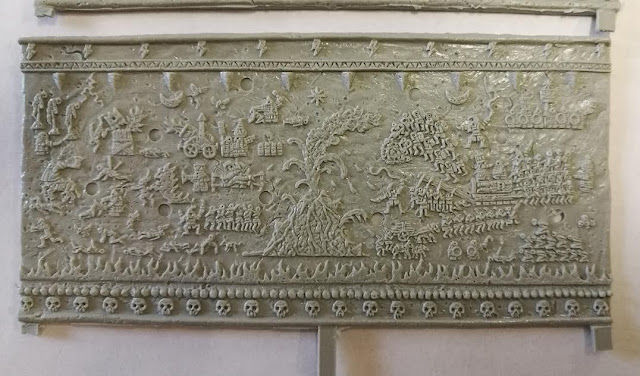 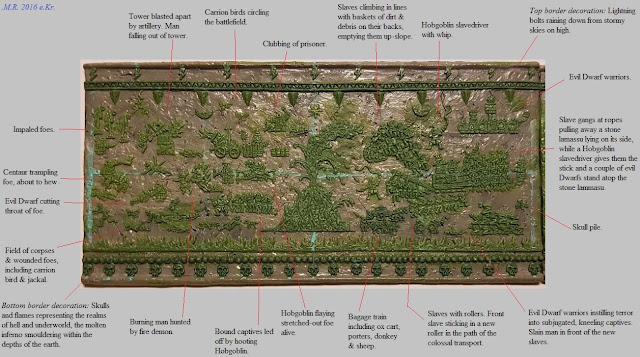 Size comparison
It should be noted that these wall relief plates were very much sculpted with a ruler, but being an amateur I have not achieved perfectly straight lines. Customers might want to file and scrape away at the edges to make the plates fit whatever purposes they have in mind.

See the complete list of kits and models for sale here.